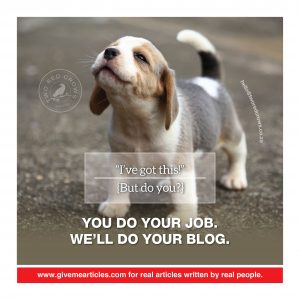 Anyone with a pulse gets a warm, fuzzy feeling just looking at this picture. Why? Humans are programmed to release the feel-good hormone, oxytocin, with certain stimuli (e.g., cute puppies).

And it doesn’t matter that this is a picture and not the real thing. The human brain responds to certain stimuli, authentic or ‘fake,’ equally.

Does the same principle apply to business? Is authenticity, at best, overrated, and at worst, holding brands back?

Authenticity: not all it’s cracked up to be

Faithful, true, caring, motivated, support[ive]. These sound more like a dating profile than a brand description. Yet this is the Journal of Consumer Psychology‘s buzzword-heavy definition of authenticity, marketing’s golden child.

But should it be?

In 2017 Stackla conducted an initial study interviewing roughly 2000 consumers and 150 B2C marketers. Their question: Do marketing attempts to project authenticity and consumers’ expectations coincide? In other words, is all this work paying off?

The short answer: no.

They followed up with another study in 2019. With time, had businesses learned? Had things changed?

The short answer: no.

So yes, 90% of consumers expect authenticity. But if brands fail to provide content that resonates as authentic, time and time again, is it worth it to keep trying?

Authenticity’s success as the exception, not the rule

While 92% of brands consider their content to be authentic, only 51% of consumers are buying it. What’s the disconnect?

Is authenticity in the eye of the beholder? Is it not the panacea that marketers have flocked to all these years but a fluke?

Quick test. What feelings, ideas, or people do these words remind you of: convicted, felon, murderer, death row.

Despite the sports apparel empire’s adrenaline-inspiring slogan’s success, its origin has absolutely nothing to do with sports. Ad-agent Dan Wieden cooked it up after hearing about murderer Gary Gilmore’s last words.

Just do it is one of the most successful marketing slogans in the world. But is it and its origins, relative to Nike and its products, authentic? Nope. Successful? Absolutely.

But forget Nike— there are studies proving authenticity works, right? It works! Right?

Or has authenticity taken credit when other factors are at play?

Perhaps it depends on where you look.

Take, for example, outerwear giant Patagonia, whose brand has become synonymous with quality goods and environmental advocacy. Started in 1973, they have grown to become one of the largest providers of outdoor gear for both nature enthusiasts and the fashion-savvy.

Perhaps. Collectively, Patagonia has bought, donated, and conserved 13 million acres of land throughout Argentina and Chile. So you could say that they put their money where their (authentic-speaking) mouth is.

Apart from giving back to causes that align with their upscale, outdoorsy target consumers, they have also struck a chord through anti-consumerism and anti-capitalist campaigns. In 2011, they increased revenue by about 30% after launching the “Don’t Buy This Jacket” campaign, which asked their customers to not buy new, but promoted the purchase and sale of their products secondhand.

In 2015 they launched a free mobile product repair service called the “Worn Wear Wagon,” a van that drives around repairing gear and teaches folks how to mend garments themselves. This “anti-” scheme seems to ring true for their customers. But is this feasible for everyone? And can their success even be attributed to authenticity? Or is it built on decades of delivering high-quality products and standout customer service?

Is it possible that these staples are the true heroes, and any perceived authenticity is simply a coincidence? Running parallel, but not integral to their success?

What about a business built around a social mission?

Take a look at Warby Parker, a trendy direct-to-consumer eyewear brand, and one of Fortune’s “unicorns.” Its founders jumped on the “giving back” bandwagon, adopting a similar model to Toms’ shoes with a Buy one, we’ll donate one promise. For their target market, this seemed like a great move towards social responsibility and *authenticity*. In their own words, the social aspect is what motivated them. The catch? Their customers “didn’t care.” After focus group testing, they realized that their customers, the majority of whom are socially-vocal Millennials and Gen-Z, prioritize style and fit. Customer experience came second. Their social mission fell to the wayside.

So, was it authenticity that got them off the ground? Or was it the quality direct-to-consumer product?

In the end, these are still businesses. Capitalists at their cores, is it even possible for brands to care? As genuine and humanitarian as the people behind a brand might be, is all that waxing-poetic just that?

Possibility: Authenticity ultimately sets brands up for failure. Society, its needs and demands aren’t what they were fifty years ago, requiring brands to continually adapt—products, business models, graphics, the list goes on. But does authenticity merit a spot on that list?

If authenticity is a never-ending process, that means brands can’t please everyone all the time. As social and political movements change day to day, brands flounder trying to join in or even keep up.

More often than not, businesses that try to jump on the authentic train late in their brand life flop.

For example, PepsiCo, eager to join in on Black Lives Matter, decided, after over one hundred and thirty years, to rename the racially-charged “Aunt Jemima” pancake mix and syrup as well as to replace the long-disputed logo. But many customers were left thinking…too little, too late. And why now? For many, this move feels like it has less to do with BLM and more to do with Pepsi’s -3.75 YTD (as of June 18, 2020).

Similarly, one of esports’ most lucrative competitions, League of Legends (which brought in $1.4 billion in 2019), recently found itself in hot water. Its European division, League of Legends European Championship (LEC), backed out of its partnership with the Saudi Arabian government…but only after fans discovered the link. The backlash was instant. Players, fans, sponsors, and commentators cut or threatened to cut ties, calling their apology “performative allyship.” In the past, LEC was lauded for its apparent inclusivity and support of LBTQ+. But this latest news has cast a shadow over the image of this relatively young venture, showing that even seemingly “woke” brands can still lose when it comes to being and staying authentic.

When Authenticity is Lukewarm At Best

Then there’s insurance giant New York Life and Company who admitted that their founding company sold and cashed out life insurance policies for slaves. For many, this “transparency” rang hollow and self-serving. But people still need insurance, so how much has this effort affected them?

Even “authentic” fashion favorites have recently taken a hit. Built on sustainability and “transparency,” BLM has exposed just how exclusive and elitist (read: targeted) these brands are. Millennial and Generation Z favorites, Reformation and Everlane, have issued apologies for lack of inclusivity and diversity. Goop’s quirky cousin, Man Repeller, saw its founder and CEO “step back” (only to return last week, more subdued and measured). But even then, their responses seem, at best tone-deaf, when their price tags often exclude the marginalized groups they claim to support.

Is authenticity still legitimate if it only rings true to a select few? And even then, is it worth the investment?

With businesses spending anywhere from 7-10% of their revenue on marketing, they want to make sure it works. Imagine dedicating even just 1% of that to “maintaining” authenticity when UGC is proven to increase ROI. Wouldn’t maximizing a sure thing make more sense than to throw money at a nebulous maybe?

Size: does it matter?

Considering how costly it is to generate authentic content consistently, it’s easy to wonder if it is exclusive to big businesses.

These stats prove, once again, that despite good intentions, it might just be near impossible for brands to match consumers’ expectations.

And if UGC is, in fact, not dead but king, should brands be investing in the quality of their product instead?

Authenticity is NOT Brand Storytelling

A brand can have a good story and not necessarily be authentic. But a brand cannot be authentic without a good story. Just look at the success of clothing brand Madewell who bought the name and logo from a family business, stripped it of its familial production value, and sold the vintage story as their own.

Fans of the vintage-y brand buy up the story (and the clothes) never mind its origins. It’s an enticing story, a mom and pop business selling quality, American-made products with a modern take on classic fits. If it’s not true, why do consumers still flock to it?

Remember the puppy? At a chemical level, these reactions don’t depend on the authenticity of the story being told but on the story itself. 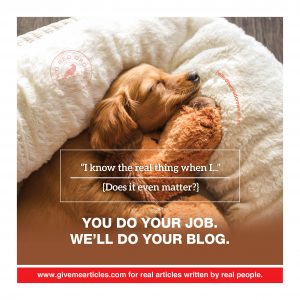 So for brands that want consumer engagement, authentic isn’t necessary. But good content (story) is.

Going forward…is it worth it?

The expectation for brands to be socially and politically conscious is weaving a web that leaves brands trying to do it all. But can anyone do anything well when trying to do everything?

Is the election of a controversial businessman to the United States president so shocking when consumers expect big brands, like Apple, Amazon, and Google, to crossover and take political and social stands?

Are consumers modern-day Narcissuses creating their image in the brands they want to love, only to reject them when the reflection rings false? Is it worth it for brands to figure out, or is it better to stay out of the ring altogether?

From a storyteller’s perspective: Authenticity might be challenging to get right, but good storytelling isn’t. Some things are always welcome: cute puppies, strong calls to action, and good writing. Let the Two Red Crows writers help you out (*puppy not included).

Why is our campaign called, Going Somewhere, SEO? We’re glad you asked.  The whole point of your blog is to land up on the first search engine results page shouting, Pick Me! Pick Me! Sadly, blogs without SEO are going nowhere, simply because Google won’t find them. Our articles are driven by SEO. Occasionally they ask, Are we going somewhere SEO?  The answer is always, Yes. What about yours?